For the 2nd edition of the "What's New in AnyLogic" blog, I would like to share with you one of the main priorities for our development team during their work on the new version. This most exciting advancement is around product usability. The new version contains many upgrades that fundamentally improve the modeling process in AnyLogic software. These enhancements make your everyday modeling easier, with fewer clicks, less typing and less time spent repeating actions.

First, we tried to cut down on the amount of code you have to type while building a model. For example, now elements can be chosen by using drop-down lists, which significantly accelerates the workflow. To make a reference in a logical object (for example, Queue or Delay block) to a graphical object (for example, path, node, area), you only need to click on the object in the Graphical Editor. This allows for two quicker and easier ways to set links between elements. 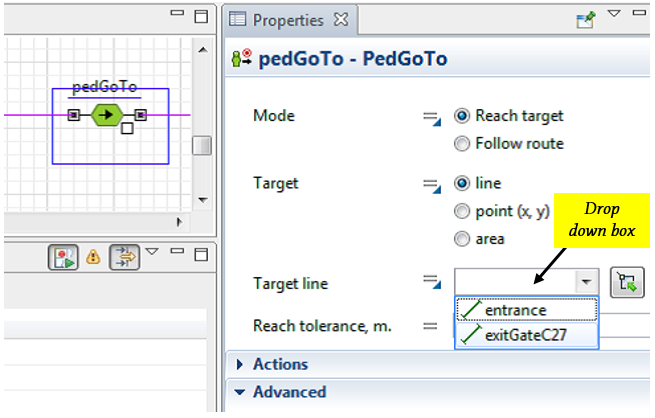 Adding shapes to existing groups is also now even easier. Just choose the shape, call the context menu, and choose the group you want to add the shape to from the list. You could also just click on the group in the Graphical Editor.

Another small but very useful improvement is an automatic connection of flowchart blocks. When you add blocks, the closest ports will automatically connect, significantly reducing model design time. With this feature, you can create the structure of a simple discrete event model in just a few seconds.
The new Option List element makes defining agent attributes that have limited choice of alternative options, quicker and easier. For example, sex (male, female) or marital status (single, married, separated, divorced, widow) can now be set in the Projects view and chosen with just one click.
The Code Completion mechanism has also been improved by suggesting only relevant choices for entering.

Transitions in statecharts have become more visually understandable. Now transition lines have indicators corresponding to the transition type. When looking at a diagram, it is easier to understand what processes it describes: 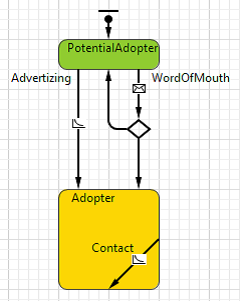 These minor changes accumulate to make working with AnyLogic software simpler in both ergonomics and in user behavior logic. If you have already installed the newest version, I'm sure you recognized many of these features in the first few minutes of your work. For those who have not, I suggest downloading AnyLogic 7 now!

I'll continue to showcase the new AnyLogic 7 functionality in the AnyLogic blog. The next edition, "Support of Pull Protocol" is coming soon!