The winner of the simulation modeling contest, organized by The AnyLogic Company on RunTheModel.com, has been decided. The voters from our LinkedIn and Facebook communities chose the winner. The second best model was Steel Plant Dynamic Simulation by Jaco-Ben Vosloo.

Alex Shcherbyna, from the Ukraine, won with his Times Square Outdoor Advertising Effectiveness model. He will get an iPad Mini or an equivalent Amazon gift card. His model is a presentation of simulation for an outdoor advertising estimation in the media planning industry. In an interview, Alex tells us how he got this far.

Alex, please tell us about yourself, your job, your hobbies, etc.

I have always worked in the field of economics. First, I was a software sales manager, then a marketer, and then an advertising manager. Now I work for QuartSoft Corp. as an Android developer in the mobile development department. I began learning Java a long time ago. I've been professionally involved in software engineering for about two years.

My hobbies include sports, especially martial arts and team ball games. In literature, I prefer the fantasy genre (especially Iain Banks), but I had to abandon it years ago for the sake of scientific literature. That was the reason I also had to give up photography and all other creative hobbies. I also like music a lot. I prefer different music – from Sissel to Blink 182, and old-school funk. In my free time, I enjoy playing Driver: San Francisco. I have played Driver since childhood.

Why and when did you become interested in simulation modeling, and why did you choose AnyLogic?

I searched for good forecasting marketing software for economics for a long time. That's when my own ideas about what the perfect software for these purposes should look like began. As I searched further, I came across simulation modeling, and AnyLogic in particular, in 2005. Then, I began to draft my own software for system dynamics and discrete event simulation for marketing channels analysis. I stopped doing it in 2010 because AnyLogic was already satisfying all of the demands of the industry and it had become a very powerful tool for forecasting and analytics. 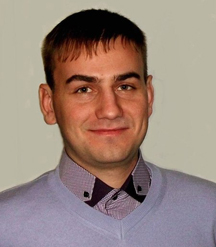 How did you come up with the idea of creating the Times Square Outdoor Advertising model?

I chose this idea especially for the modeling contest. It was based on my original idea of marketing channels modeling. Everyone knows that the most important thing in the contest, and in business, is to present your product impressively. What could be more impressive than advertising in Times Square?

What were the main challenges that you had to overcome while implementing this project?

This model required a lot of work. I began by developing the geography of Times Square in AnyLogic. Simultaneously, using a web camera, I collected the data of pedestrian and car movements on the Square during one day. Then, I created the table functions. The milestones of the project were the following: I had to create the scheme of Times Square, implement the traffic control block, launch pedestrians and cars, upload the 3D models, research how the displays were situated, and set the visibility areas. Then, I began to collect and process the quantitative data to get the final result OTS.

Each of these points took me approximately a week. I began the work on June12, and ended it on July17 (without taking into account the bug fixing). Each point contained pitfalls, and each point required implementing new ideas, which had not been tried before. There was no project to copy the solution from. The most important thing for such a big model was paying attention to the resources. I had to take into account optimization too. I had to choose one of two things: either optimized model performance, or a beautiful presentation. As a marketer, I chose the latter and uploaded nice 3D models of New York transport, traffic lights, and Times Square landmarks.

Thanks for your answers, Alex! Congratulations and good luck in further modeling projects!