The BCMEA (British Columbia Maritime Employers Association) is an organization created by maritime employers operating in the five port regions of British Columbia, Canada. The employers are terminal operators, stevedores, and shipping agents who depend on longshore workers for the loading and unloading of cargo and other dock activities. The association represents over seven thousand active longshore workers and is involved in worker training and jobs dispatch.

Partnering with SimWell and the Simon Fraser University Beedie School of Business, the BCMEA created a digital twin of the Vancouver longshore labor dispatch.

SimWell are prize winning specialists in industrial engineering simulation and optimization based in Canada and the United States of America. Their team of simulation modeling experts advised BCMEA on digital twin capabilities and helped implement an agent-based simulation using AnyLogic.

Two student groups from the Simon Fraser University Beedie School of Business worked on the project. One group used machine learning to train a model for labor and skill availability, and the second group created visualizations to help scenario comparison.

The BCMEA is responsible for ensuring a reliable supply of trained, qualified longshore labor for all its ports with the aim of avoiding shortages. During 2016, the BCMEA unexpectedly began suffering record shortages and part of its response included the development of short, medium, and long-term plans to improve longshore worker training and availability.

As part of the plans, they wanted to simulate the labor dispatch process. This would make possible the analysis of skills-matching at dispatch and the determination of training needs.

The complexities of longshore labor dispatch

For the BCMEA, dispatch happens three time a day and involves matching required jobs to available employees. Matches depend on various parameters:

The workforce can choose where to go and who to work for, meaning labor availability is unpredictable. The exceptions are for callbacks, where employees are called back for a job position they have been working, and for those who are directly employed.

Not knowing which workers will be available from one day to the next means that shortages can occur at any time and that jobs requiring certain skills can go unfulfilled. The answer is to have a deep pool of trained and qualified labor to draw from. This in turn leads to an ongoing challenge: how much training is needed?

Until this project, the amount of training was determined by gut feeling – from the estimations of people in conversation with employers. That way of working had been satisfactory but was now less effective at meeting the shortage KPIs, since jobs were requiring more skills and more training.

The BCMEA’s medium- and long-term plans, which were created in response to 2016’s unexpected shortages, lead to the creation of a data analytics program.

To begin, the BCMEA created datasets and dashboards to understand current and historical states for longshore labor dispatch in British Columbia. The result of this initial work gave them the capability to recognize trends and better inform planning.

Following on from the datasets and dashboards, the aim was to develop predictive analytics capabilities. These would enable the BCMEA to look into the future and analyze scenarios, such as the opening of a new container terminal or the effect of training more truck drivers. For the decision makers, it might be easy to predict that more training will improve labor availability, but the aim for the predictive analytics was to quantify the labor and training needs.

SimWell advised and helped build a digital twin of Vancouver longshore labor dispatch as the basis for developing predictive analytics. They implemented an agent-based simulation model using AnyLogic that worked with the necessary metrics and represented the behavior of the real-world system.

Feeding into the digital twin, thanks to its easy extensibility, was a separate machine learning (ML) model of labor availability. The availability model was developed by Simon Fraser University Beedie School of Business, who also provided visualizations for better understanding and communication.

The developers separated the availability model from the rest of the model so that it could be iterated independently of the simulation model. The ML model is external and connects to the AnyLogic simulation model via web API.

The reason the availability model uses ML to capture labor variabilities is because the method proved more accurate over time than alternatives such as heuristics. The patterns in labor variabilities that are present in historical data are difficult to capture explicitly but ML provides a way to work with them.

A key design feature was the separation of the data parameters from the process configurations. This distinction made possible data driven scenario creation where historical data, such as employment records, can be modified in various ways to test hypotheses. For example, analysts can investigate the impact that different training programs might have for different scenarios.

At present, the digital twin can simulate a year of Vancouver’s longshore labor dispatch in six minutes. Simulations can run with a user interface or in a headless mode called from a Python script. Every action in a simulation is logged and available for further analysis outside the platform using Python scripts and Tableau data visualization.

The digital twin is useful in many ways. Initial results include analysis of the bulk operator pool, a complex rating that requires a large training effort. Using the digital twin tool to analyze training needs determined an optimal three-year return on investment for training.

In another case, the model was used to examine rubber-tired gantry (RTG/RMG) labor needs in a port terminal expansion scenario. The results indicated the port would have a 300% increase in RTG/RMG labor needs.

Overall, the Vancouver longshore labor dispatch digital twin will support long-term strategies and predict trends in demographics and technologies, and enable business based on scenario modeling. The digital twin will also be extended to other regions.

This case study was presented [PDF] at the AnyLogic Conference 2021 by Bart Fransen, Senior Data Scientist at BCMEA. 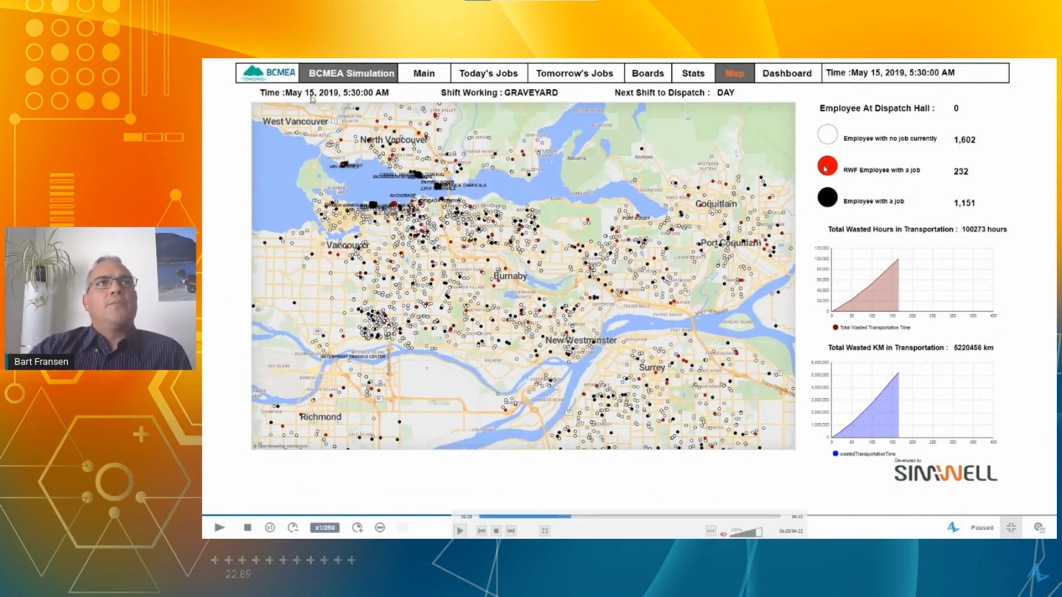