A typical maritime container shipment involves a deep-sea transportation operator, a port terminal operator, and an intermodal operator. Containers are offloaded and stored at terminals, and then they are usually sent by ground transportation to their further destinations. This hinterland part of the supply chain can often become a bottleneck because if a deep-sea vessel gets delayed, it can complicate further shipment processes.

A delay of a ship means a delay of all the containers it carries. If further delivery is by train, the containers will likely miss those trains and need to be shipped on the following ones. This dramatically complicates the shipment planning process. Consequently, containers are often delivered late, terminal storages are overwhelmed, and train capacity is seriously underused, resulting in a loss of money for all parties involved.

The situation gets even worse if the arriving ship is really large, because offloading such vessels may take more than ten hours. Nobody knows whether a certain container will be offloaded at the beginning or end of this long process, and this makes the planning even more complicated.

To avoid such situations, intermodal operators try to rebook other containers for the available train capacity, but they have to do it in advance (for example, in the port of Hamburg, Germany, at least one day prior to train departure). To do it more efficiently, the operator would need early provision of information on the arriving containers (time of arrival at the terminal and destination).

One assumption is that the problem could be solved if all of the parties involved knew the estimated time of arrival (ETA) of each container, which would mean knowing the time each container arrived on the quay. Today, only vessel ETA is available, which does not help much, because it makes a difference to the train operator if a container is offloaded first or last. Availability of container ETA would enable rebooking of loading-ready containers for hinterland transportation on trains to increase the capacity utilization.

Researchers from the Technical University of Darmstadt, Germany, were working to identify whether the introduction of container ETA would improve the situation in the port of Hamburg, one of world’s top 20 ports in terms of container traffic.

The researchers decided to reproduce two equal, three month time periods of system operation in a simulation model and compare the performance with and without the availability of container ETA. They decided to test and compare three policies that the intermodal operator could implement:

TU Darmstadt partnered with HHLA (port of Hamburg operator), TFG Transfracht (intermodal operator), and Hapag-Lloyd (deep-sea carrier) to gather data from all of the parties involved in the transportation chain to test the work of the system with container ETA. The partners provided the following input data for the research:

The data was used to build distribution functions in the model.

The model reproduced the transport chain by utilizing the system dynamics approach. It simulated the continuous flow of containers from the arriving ships, through the terminal, to the trains. Discrete and dynamic events simulated containers arriving at the terminal from the vessel and loaded on trains. The modelers also added extra features to the system dynamics model, such as functions and programming to add decision rules for the intermodal operator.

To make the results stronger and more comparable, the modelers ran Monte Carlo simulation experiments, which contained multiple simulation runs for every input volume, each with randomly generated parameters.

The results of the simulations for the different policies showed that the introduction of container ETA information would increase the capacity utilization of the intermodal operator’s trains (see picture). The ETA availability would have the best effect on the system if the intermodal operator used the second policy: form a pool of loading-ready containers and send containers from this pool in case of a delay.

For the situation with large vessels, the application of ETA improved the capacity utilization, but did not allow it to achieve the acceptable level of 75 percent. Large vessels have a strong impact on transshipment processes, and the ETA introduction was not meant to improve this process.

Also, simulation showed that the use of the suggested policies alone, without container ETA introduction, would not change the situation.

The results were presented to the partners at workshops. For some maritime transport chain industry practitioners, the idea of container ETA introduction did not seem intuitive. Simulation proved to many of them that it would improve the situation. 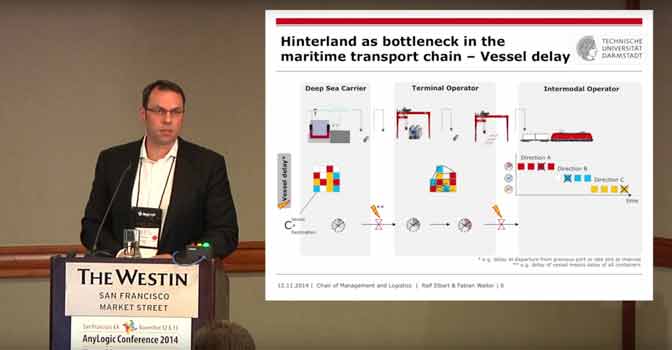 Further research plans include testing the container ETA suggestion in Asian and American port environments, and then evaluating the economic influence of ETA introduction on each individual user. The researchers also plan to introduce agent-based modeling elements to the system dynamics model to track the movements of each container.