Choosing the Best Concept for a Passenger Rail Car

The largest CIS rail car building facility, Tver Carriage Works, needed to choose the best passenger rail car concept for a city train. The plant needed to compare passenger entrance/exit times during peak loads for concepts that had different door amounts and widths, and then choose the best variant. They contracted ITS Consulting to perform this task. The consultants found pedestrian simulation modeling to be the best possible instrument to provide a solution.

Five rail car concepts were provided as input data. To choose the best one, the consultants had to compare them using the following criteria:

To simulate passenger movements, the modelers employed AnyLogic Pedestrian Library, together with 2D and 3D animation, which allowed for visualization of the process.

To make the model realistic, they divided passengers into several categories (regular passenger, elderly passenger, and passenger with luggage), each of which had its own specific behavior, including a “give up a seat” scenario.

Passengers in the model entered and exited cars in a stochastic order, similar to the real world conditions of public transportation. The modelers used average 50-runs statistics for analysis. 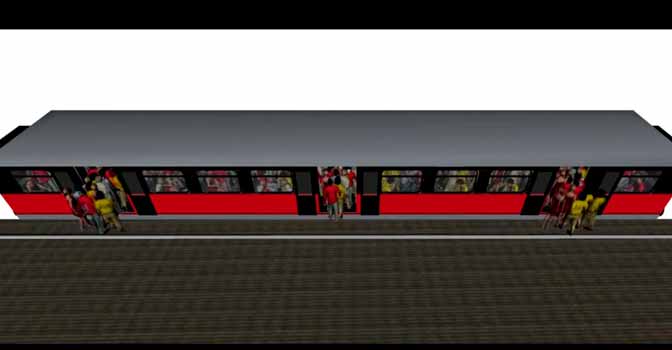 Thanks to the density map functionality, the model showed that using 3-door concepts resulted in a more effective use of space between doors in comparison to the other variants.

The results were used for the design of the new Tver Carriage Works’ EG2Tv electric multiple unit.