Moscow Ring Railway, built in 1908, crosses city outskirts, residential districts, and industrial areas. It is currently being used for freight traffic only. The launch of passenger trains on this railway is planned for 2016, and is expected to drastically improve the road traffic situation and congestion on public transportation. Many of the newly built stations will be connected to subway and commuter rails by huge transfer hubs. Passenger flows, at one of the future hubs, were simulated using AnyLogic software by the ITS Consulting Company for JSC Moscow Ring Railway.

The aim of the simulation project was to evaluate the working performance of the Cherkizovo hub at peak passenger load times in order to discover the construction elements limiting the capacity of the hub (corridors, stairs, escalators, ticket barriers, ticket windows, fare boxes, etc.). Hub performance was considered acceptable if passengers didn’t experience difficulties in moving along the hub and buying tickets during the peak hour of 8:00 to 9:00 in the morning. 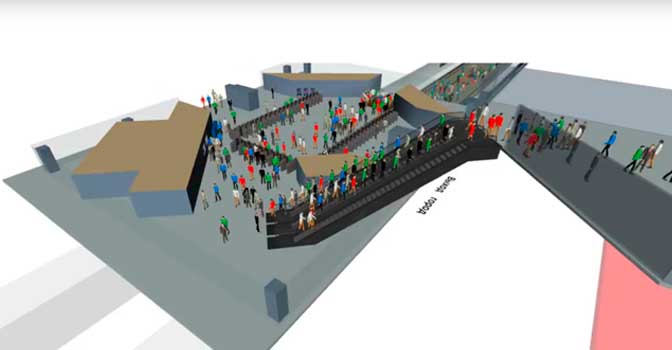 The Cherkizovo hub model used both the Pedestrian and Rail Yard libraries of AnyLogic. 3D animation capabilities of the software were used for system visualization. The model integrated the projected railway station and the existing subway station and featured the following elements:

Passengers could arrive at the terminal by foot, or change between railway, subway, and ground transport. Passenger movement algorithms can be found in the figure below.

To reflect the system correctly, the modelers had to take into account the following peculiarities:

Simulation showed that the planning concept of the Cherkizovo transport hub operated well with peak passenger loads, and all the construction elements had a reserve capacity. However, if the number of passengers increased, bottlenecks were expected to appear close to ticket windows because the ticket windows were situated along the main route of passengers on their way to ticket barriers.

To optimize the ticket windows’ load, and decrease passenger service time, the client was advised to encourage passengers to buy tickets at fare boxes or use other methods to purchase tickets. It was also recommended that the client decrease the number of fare boxes, as some of them would not be used even if some passengers switched to them from ticket windows.

The Cherkizovo model will be employed by JSC Moscow Ring Railway for finding optimal parameters of other transport hubs. The model will also be used for researching passenger behavior in emergencies and during evacuations.