The Moscow metro is Europe’s busiest and most expansive subway system in terms of annual ridership, and it is Russia’s most dynamic means of transportation. Every year new metro stations are built and the existing metro facilities are reconstructed. The latter includes the renovation of station antechambers, the creation of additional entryways, and the installation of new escalators.

When planning the subway renovations, the engineers wanted to be sure that the design solutions they chose would comply with current safety regulations and ridership. For instance, at Kiyevskaya station, one of the Moscow’s largest metro hubs, with ridership of 30,000 passengers an hour, the engineers decided to enlarge the existing antechamber to increase the passenger flow, replace the escalator belts, and add an extra escalator in the rundown corridor to the Arbat-Pokrovskaya line. To evaluate the project design, they contracted the specialists of the Institute for Development of Transportation Systems (IDTS).

The consultants were asked to develop a pedestrian simulation model in order to:

To this end, the consultants created a simulation model of the subway station using AnyLogic pedestrian modeling software.

In the initial phase, the specialists developed a baseline simulation model that reflected passenger flows behavior, from disembarking from suburban electric trains at Kiyevskaya railway station to embarking on the trains in the subway.

To make the model as realistic as possible, and to properly reflect the behavior of the passengers, the pedestrian model was calibrated on the basis of an in-situ survey. The consultants paid attention to crowd behavior in the loading and unloading areas of stairways and escalators.

With the completed model, the consultants analyzed different topological options for the antechamber entrance design and selected the most efficient options, with and without building redesign. 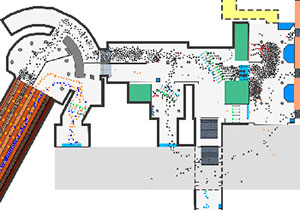 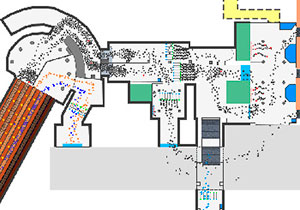 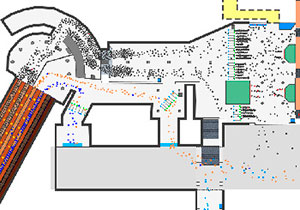 The consultants also simulated the scenarios for the operation of escalators during the reconstruction, during the commissioning of new escalators, and during the evacuation of passengers. They noted that, in the case of three escalators simultaneously lifting only in rush hours, the exit antechamber would be unable to handle the expected passenger flow because the escalator unloading area would become congested with passengers.

The customer was issued the simulation models for further experiments, with the user interface module allowing them to change the following parameters:

As a result, the consultants offered a solution for the organization of station antechambers operations, both in the standard mode and for the renovation period, and provided recommendations concerning the operation mode of a fifth escalator leading out of the metro station to the Kiyevskaya railway station.