In recent US Census data widely reported in the press “Hispanics” have become the largest minority group in the US. Using simulation modeling technology we look at some of the structural forces that shape the characteristics of the Hispanic population. The model creates a simulated Hispanic population whose level of acculturation to the broader population of which it is a part dynamically varies according to individual choice. The modeling technique used draws on both System Dynamic and Agent based paradigms both supported by innovative AnyLogic software. The representative Hispanic population is disaggregated down to the individual level as individual agents. Each agent makes choices stochastically as modulated by its current state and the outside environment that it is in. The essence of being “Hispanic” is rooted in cultural attributes that are transmitted through the population by agent mobility and other mechanisms. While some aspects of an agent’s state are represented discretely we also draw on the well developed System Dynamics concepts of modeling “soft” variables to represent the accumulation and decay of cultural attributes within an agent. Also in the System Dynamic tradition we identify global level feedback structures that shape agent level behavior. Finally, we employ innovative data visualization to expose the system’s dynamic behavior to the audience in a compelling fashion. We find that dynamically complex behavior endogenously emerges in the population with temporally stable population sub-segments developing. The underlying dynamics that create these segments and the segments themselves are of interest to those who want a deeper understanding of the Hispanic population. In addition, most of the structures captured in this model are broadly applicable to studies of population and cultural dynamics and are not limited to the Hispanic population. 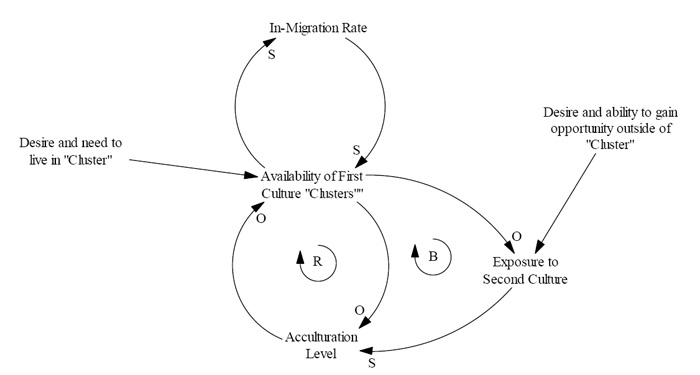