Manufacturing and economic conditions are increasingly complicated and unstable with the result that traditional scheduling methods are becoming ineffective in the face of disruption. A major Eastern European steel pipe manufacturing plant, relied on traditional spreadsheet-based manufacturing scheduling and began facing the following problems: 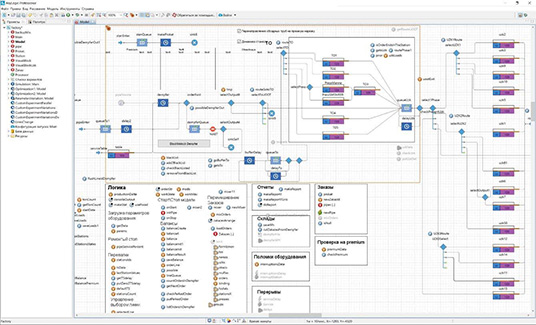 1. Elements of the model in AnyLogic

In addition, AnyLogic not only enabled the modeling of processes, but also the ability to set the logic for components in the production line and their rules of interaction.

For the material handling model, the Focus Group team included objects such as Order, Pipe, Prokat (Metal-roll), and Station. In the model, they set the logic for the whole production line, from a damper warehouse to finished order release. The input data (weekly order schedule, performance, machine units working hours, etc.) was uploaded into the model via Excel-templates.

The model could test out the feasibility of the weekly manufacturing schedules created by the pipe manufacturing plant specialists. Moreover, the engineers developed a specific algorithm that enabled the model to suggest optimal manufacturing schedules. By applying analytical methods, and testing the results with dynamic modeling, the Focus Group team ensured that the production level in the model was not lower than in schedules made by the plant team. Moreover, the model helped reduce the number of the equipment changeovers and provided more detailed planning.

2. Elements of the model in AnyLogic

The developers created a steel pipe manufacturing model that considered all production stages on the shop floor. The plant's performance improved because, based on the model, the management could:

As a result of the simulation modeling, the manufacturing enterprise minimized gaps and daily fluctuations in the handover of orders, identified bottlenecks, and refined order routing. They also combined short downtimes into longer intervals and used them to enhance line utilization. Furthermore, schedule adjustment time was reduced from three hours to three minutes. Overall, modeling the production line and developing schedules with it lead to a forecasted additional production output of 678 tons and an increase in revenue of $813 thousand per week.

In the future, there are plans to further extend the model to function as a digital twin of the shop floor by integrating it with the production control systems. Management will then be able to set detailed shifts or daily tasks for each machine unit, as well as connect planning and production. This would enable the plant to adjust its schedules based on a global view of the production site.