Tata Steel is one of the world’s leading steel producers. The company has operations in 26 countries, a production capacity of 34 million tonnes (metric tons) of steel per year, and, in 2021, had a turnover of $21.2 billion.

As the first steel manufacturer in India to receive the ISO14024 based CII Green Pro certification, Tata Steel is certified for good environmental practice in its industrial operations. The company’s engineers worked to improve efficiency at a limestone processing facility and identified possibilities using simulation modeling. The results reduced machine operation and cut costs.

Lime is the most important flux used in the LD (Linz-Donawitz) steel making process. The LD process calls for stringent quality control and a steady supply of lime, which led to Tata Steel running its lime plants continuously. The company suspected efficiencies could be made, and started a project to optimize processes at one of its lime plants. The plant had nine kilns for the calcination of limestone to produce quicklime. Processes along the whole limestone conveying circuit would be analyzed, from the arrival of limestone until its firing in the lime kiln. 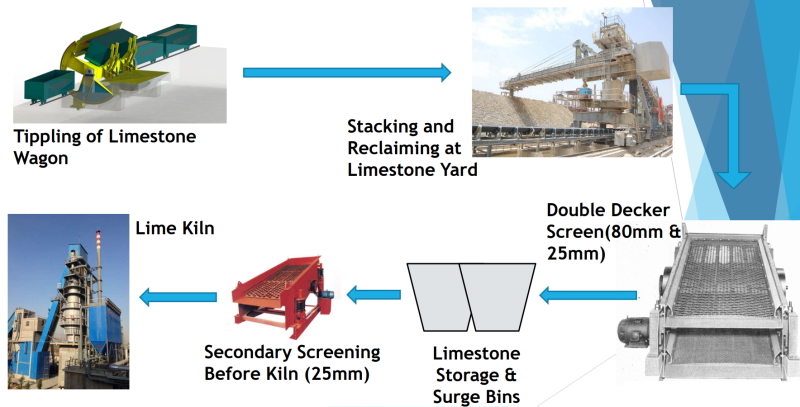 At the plant, the limestone was unloaded in a tippler (rotary car dumper), sent to the primary screening house by conveyor belts, and passed through the double deck screening process. After screening, the material was transferred to storage bins and then to surge bins. From the surge bins, it was passed again through a single deck screening process and then transferred in weigh hoppers. The material was dropped into the kilns from the top using skip buckets.

Engineers thought the feeding circuit was underutilized and that running it continuously was unnecessary. The objective, therefore, was to optimize and better schedule limestone reclamation to maximize the utilization of the feeding circuit, as well as to reduce running hours.

Tata Steel engineers developed a model for testing different what-if scenarios and understanding the utilization of the limestone feeding circuit.

The average current production at the site was calculated from plant data and fed into the simulation model, which yielded several insights. Production at the current rate could easily be accommodated with only one reclamation shift. All bins would maintain 20% to 100% capacity, and it would be sufficient to run the stockyard to storage bins circuit for just one shift each day.

The objective of the next simulation experiment was to find bottlenecks in the circuit. The modeling in AnyLogic helped to identify that Bin 2 capacity and Weigh Feeders 3 and 4 were the bottlenecks for the feeding circuit.

The model developers also wanted to determine the maximum possible production with regards to the circuit constraints and utilization of surge bins.

As surge bins were available, Bin 2 stock could be transferred to them, meaning Bin 2 was no longer a constraint. This relied on there being free space in the surge bins at the start of a shift. The result was increased production, however, the surge bins had sufficient capacity for only six hours of production. After that, they had to be refilled again.

Buffer stock analysis using the model allowed the plant to obtain the minimum stock levels that needed to be maintained in Bin 2, Bin 3, and Bin 4.

The Bin 2 constraint was no longer applicable for kilns 1-6 if the company utilized a surge bin with a minimum 400 tonnes capacity for initial stock. In such a case, it would be feasible to take full capacity production from kilns 1-6.

Tata Steel engineers tested the schedule to understand buffer stocks in the circuit and determine sufficient levels. They developed the optimal strategy for daily production operations.

The transfer from the storage bin to the surge bin could be taken in two periods of eight and six hours. This circuit could then be turned off for ten hours a day, saving power.

The simulation with AnyLogic helped Tata Steel to maximize the utilization of the feeding circuit. Thanks to modeling, they carried out five experiments and developed favorable plant operation schedules that could reduce machine running and cut costs related to electricity. Then, the specialists calculated the power consumption savings as well as cost savings per day.

Watch the video about this case study presented by Tata Steel at the AnyLogic Conference 2021.