Analysis of Management Strategies for the Aircraft Production Ramp-up

Ramping up the production of a new aircraft is a complex process, involving continuous evaluation and revision of both the product and production processes. As a result, aircraft lead time can increase dramatically.

The project, aimed mainly at new product ramp-ups in the aircraft and shipbuilding industries, focused on developing tech solutions for risk reduction, decision-making, and planning.

Simulation was chosen as a part of the ARUM solution. It allowed the participants to reproduce a real production environment (based on an Airbus Group case study) and provide a benchmark for testing ARUM solutions.

AnyLogic simulation software was selected because it can combine agent-based and discrete-event modeling methods.

The simulation model included a part of the Hamburg Airbus A350 assembly line where two different pieces of the fuselage are completed.

This part of the assembly line consists of six assembly stations with 30-35 people working at each, and approximately 300 work orders per station.

The challenge was to simulate the ramp-up process with general productivity increasing over time, and the whole ramp-up period lasting up to two years. 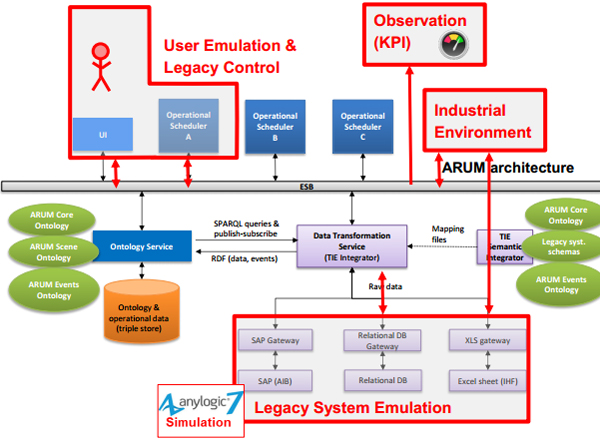 The agent-based and discrete-event model consisted of three types of elements:

The control strategies included open work policy alternatives. This meant that if some of the work could not be done, it could be postponed and completed further along the assembly line, perhaps in another city. In this case, workers from Hamburg would travel to complete the work (the “traveling work” strategy). Alternatively, work on the section could be suspended until the problem was resolved (the “stop and fix” strategy).

The disturbances that occurred during the ramp-up included:

Included in the model statistics were: aircraft lead time, the amount of traveling work, and resource utilization rates (labor, materials, and stations).

The project resulted in a model that was easy to understand and reuse. Ultimately, it was integrated into the ARUM solution architecture, including the assembly line visualization component.

The model was run to simulate the effects of the disturbance mitigation strategies currently being applied at the Airbus facility, including the “stop-and-fix” and “traveling work” strategies.

Multiple ramp-up scenarios with different sets of production plans were tested and made use of historical assembly disturbance data, including extreme scenarios.

Overall, the model will be used to compare plans suggested by the ARUM suite with current management practices. This will allow the development of optimal disturbance mitigation strategies for both aerospace and shipbuilding manufacturing ramp-ups. A powerful tool for accelerated product lifecycles.