Transportation Optimization Model of an Ambulance System in India

Emergency services play a significant role in a nation’s public care system, providing responses and ambulances to millions in need every year. But, due to the increase in population, it is becoming increasingly difficult to provide reliable emergency services in populous countries like India. Based on a transportation system analysis, the paper discusses a new algorithm and a system design with a transportation optimization simulation model.

The proposed transportation optimization model is designed keeping the Indian conditions in mind. The solution is able to work in conditions like congested environment, smaller and uneven roads; and most importantly in places where there are no strict traffic rules. It also enhances the credibility of the existing system by developing a dynamic dispatching algorithm and a hierarchical model consisting of ambulances and sub-vans, i.e. local transport vehicles like auto-rickshaws.

The novelty of the proposed method of transportation optimization is in layered (two-tired) system. In the traditional or present system, there is only one vehicle used for the entire transport of the patient. Whereas, in the proposed system, there are two different vehicles per patient depending on traffic density and location. Using sub-vans in dense traffic and ambulances in light traffic conditions minimizes total time. 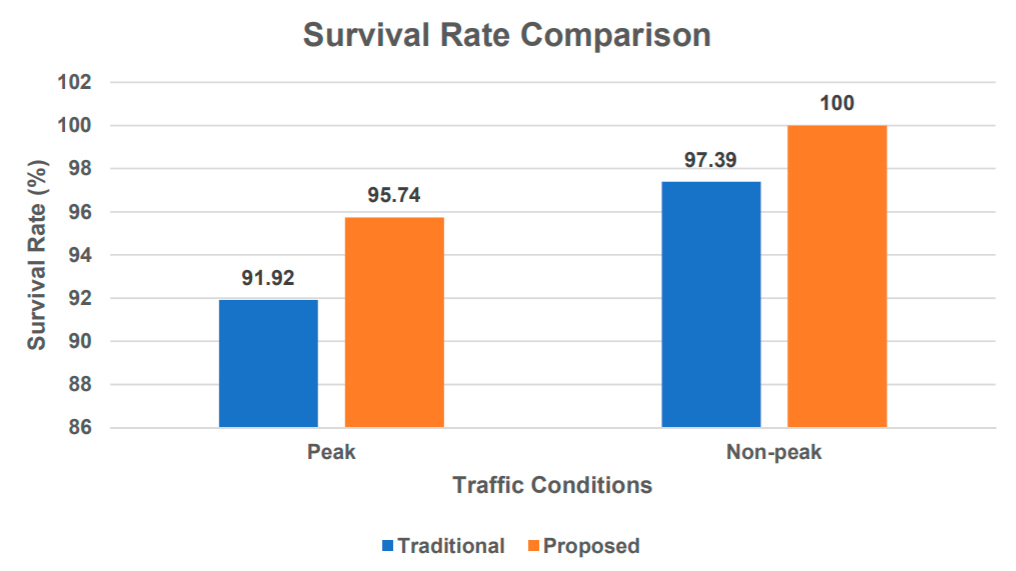 Survival Rate Comparison between the traditional and the proposed model