Aircraft turnaround operations represent services provided to aircraft to be ready for the following take-off, while parked in areas of an airport known as aprons. Example services include passenger disembarking/boarding, baggage unloading/loading, refueling, cabin cleaning, catering, toilet, potable water servicing, etc. These services are executed by human operators, who employ many types of equipment and vehicles. These go by the name of ground support equipment (GSE).

Airport apron operations are the points where the flows of passengers and baggage/cargo interchange between the land and the air transport modes, hence they are a particularly critical component in the air transport value chain.

Several macro-factors concur in determining the punctuality and efficiency of apron operations at any airport:

In this paper, we focus on the real-time management of turnaround operations, and assess the relative merits and limitations of so-called dispatching rules that originate from the manufacturing literature.

Dispatching rules are applied to prioritize the jobs waiting to be processed by the same resource (e.g. a machine), with a decision being made every time a resource is set free, and the job having at that time the highest priority being selected for processing.

Researchers selected few rules we investigated in our study:

In this research two principal settings are studied:

The simulation model had been developed and validated for Luton Airport, as part of a separate sequence of projects. The level of detail in the model includes key elements of the layout of an airport’s apron, with actual distances between aircraft parking stands, permitted routes for ground movements of support vehicles and aircraft, etc.

AnyLogic was chosen as the platform for implementation. In terms of modeling stance, a hybrid simulation approach with elements of agent-based, discrete event simulation and reinforcement learning was adopted. The core of the model is agent-based, with six main agents interacting with each other. These agents are:

State Charts model the behaviors of all these agents and the related interactions. Action Charts model other key aspects such as the logic representing all six dispatching rules. Finally, the discrete-event components of our model deal with relevant details of all turnaround tasks to be executed.

In the overall approach there are two main components - the "Simulation Module" and the "Process Manager". The former coincides with the hybrid ABS/DES model, while the latter consists of Python code, the main element of which is the Reinforcement Learning algorithm. The Process Manager guides the overall control flow. 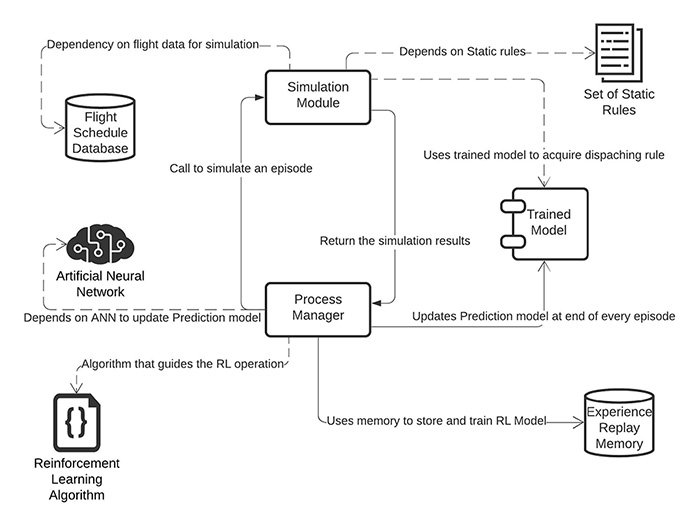 Conceptual representation of the integration between simulation and RL

We have shown that, when assigning teams/employees to turnaround tasks in real-time over the day of operation, the choice of the ‘right’ dispatching rule can indeed make a difference. We have also shown that Dynamic Switching clearly has potential.

We see the potential for investigating multi-criteria decision analysis methods to support the choice of the ‘best’ dispatching rule more thoroughly. Integration of GSE operational management in future investigation is very much advised, given that in many airport operational settings GSE allocation and management by teams/employees of ground service providers is often far from the simplified scenario assumed in this paper.