Are hybrid simulation models always beneficial? When should one modeling paradigm be used more than another? How does one know the right balance has been reached between different simulation techniques for the system under investigation? We illustrate selected insights into hybrid simulation through the use of a discrete event simulation model and a hybrid discrete event and agent based model of the obstetrics department at Akershus University Hospital. Design decisions are not straightforward, and have different impacts on model development and ability to address different scenarios or potential changes. In the discrete event simulation model, the majority of the logic and code representing patient pathways is contained within the structure of the model. In the agent based-discrete event simulation (AB-DES) model, a selection of the code is shifted from the model structure to the patient entities. Scenarios are presented which illustrate strengths and weaknesses of each model. These are reflected on and future work is suggested.

HØKH were approached by staff from the obstetrics department in June 2014 with a request to investigate the flow of mothers through the clinic. A series of workshops were held which will be discussed in greater detail in section 2.2. Simulation models were used to analyze the patient flow and organization of the department to identify bottlenecks and areas with potential for improved resource utilization. The purpose of the paper is to compare a hybrid agent based discrete event model with a discrete event simulation model of the same system the obstetrics department.

The remainder of the paper is split into seven sections. Section 2 sets the paper in the context of other hybrid simulation modeling work and provides more detail about the obstetrics department. Section 3 summarizes the data collection, processing and analysis that were undertaken to provide data for the models. Section 4 describes the models that have been developed for this paper. Section 5 presents three hypothetical scenarios used to evaluate the models. Section 6 presents selected scenario findings. Section 7 evaluates how the two models addressed the scenarios. Section 8 highlights selected methodological considerations and concludes with suggestions for future research.

This paper has attempted to illustrate certain benefits and drawbacks of using hybrid simulation. The models were developed to address a practical concern within a hospital environment. This paper focuses on the technical and philosophical modeling perspectives rather than the policy implications of the models findings. Two models were developed, a discrete event simulation model and an AB-DES model. They were evaluated against three scenarios. The two hypothetical scenarios were relatively easy to implement in both models, with slightly more work required when adjusting the AB-DES model. However, the hybrid AB-DES model allows for more types of modifications than does the pure discrete event simulation model. The process of running the empirical records through the model was only practically feasible using the AB-DES model, and this process revealed deviations between model performance and statistical estimates that could be crucial by identifying possible data error, or enabling a search for ways to improve the match between model and actual department behavior when encumbered beyond nominal capacity.

Specific areas for future work include:

We would like to improve the flexibility of the approach whilst balancing the accessibility and understandability of the models to non-modelers. By approach, we mean using the best methods to model different parts of the system, that are capable of dealing with changes, loosely coupled, and enable the data on which the model is based to be validated by the model. 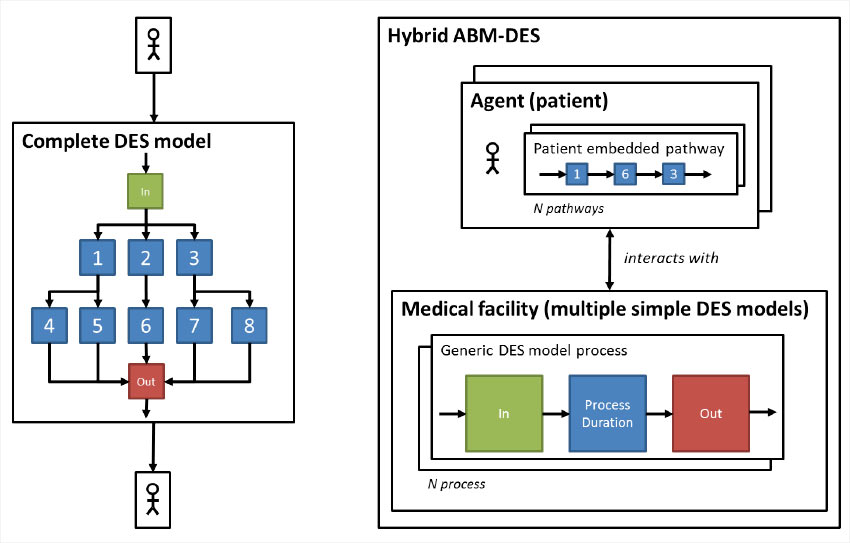