Business is a field for experiments. But it’s best to run them on simulation models

Modeling allows you to decrease implementation costs and risks while still in the planning stage. It can also be the best way to optimize existing processes.

In the recent decade simulation has received special attention from professionals not only in the sciences, but also in various areas of economics and business. The reason for the growing popularity of this technology is associated with the extreme complexity of social, economic and industrial processes in the modern world. Of all methods available today, experimenting with a realistic computer model is the most efficient means of assessing the viability of business systems and processes.

Technical progress has sped up and intensified changes in the economy and society numerous mutually-interacting participants are drawn into these processes. Conventional analysis and forecasting methods have little applicability under such conditions. A common spreadsheet or graph will hardly enable the correct assessment of the situation, and an error in such analysis may lead to a considerable investment loss. This is where simulation comes to the rescue. Simulation technology creates a realistic dynamic computer model of the desired or existing system.

Then the model is subjected to a series of experiments, which in addition to an assessment of the system’s viability, also to delivers quantitative data with respect to its performance under various conditions. What makes simulation especially valuable is the fact that the experiment time frame is virtually unlimited. An experiment 10 minutes long can provide you with information on your plant’s operation over a 10 year period.

Modeling a system is an encellent optimization approach and during the planning stage can considerably reduce implementation cost and risk.

The subjects for modeling are usually complex systems with complicated interactions where a large number of technologies are employed. A simple example: a model for assessing optimum warehouse parameters would include a detailed description of its structure, topology, equipment, and machinery. It would also model business processes determining the warehouse operations: what the personnel do when performing various operations, when, and what machinery they use. It would establish the schedules of goods and order arrival at the warehouse, specifying time, volume, and item identification. The simulation run would be accompanied by gathering and displaying detailed statistics: resource utilization coefficients, time spent for operation performance. Statistics generated as a result of several experiments provide grounds for decision on the direction of optimizing the warehouse operations. The above case is an example of improving an existing system. Simulation is also frequently used to create new systems with specified properties such as the design of a new warehouse complex. 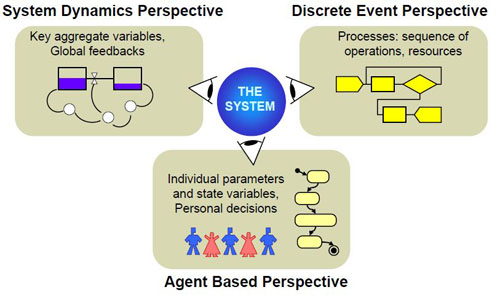 Historically these approaches have been applied and promoted by representatives of different schools with hardly any overlap. As a result, the overwhelming majority of tools support only one approach. XJ Technologies has developed its AnyLogic software to unite all three approaches within one tool. Models built within the AnyLogic framework support any of the three techniques, as well as various combinations of them within one model. For 10 years AnyLogic has remained the only tool supporting multiple-approach modeling. The features of our product have been highly appreciated by numerous transnational companies, state bodies and international alliances. XJ Technologies’ developers may proudly say that AnyLogic is the only simulation tool created by a Russian software vendor that has gained tremendous popularity in the Western market. A simulation course based on AnyLogic is taught at over 500 colleges and universities all over the world.

The software provides an option of creating an interactive animation. An animated model provides a visualization of the state and behavior of a complex system of any kind. The animation may be converted into a Java applet for subsequent publication on the Internet or be used as an independent decision support system, for example, at a manufacturing plant or in a retail network. There is a large collection of Java applets converted from models in various business areas provided for open access at RunTheModel.com.

In conclusion I’d like to give a few examples of what we believe to be successful applications of simulation techniques for solving business tasks. All the models provided below have been created within the AnyLogic framework.

Simulation of Novorossiysk container terminal (see Picture 2) was developed as a joint effort by Morstroytechnology LLC and XJ Technologies. The model was used to assess the throughput capacity of the terminal being designed, and in the future may be used as an operations management system. 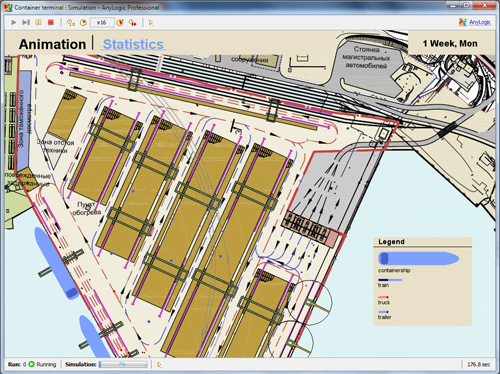 The completed simulation operates with the following data: 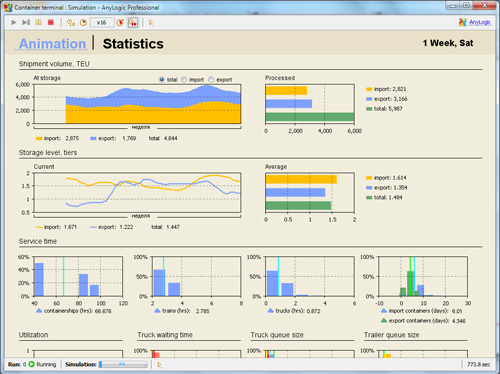 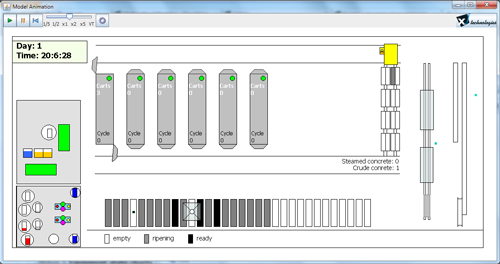 The model simulates the entire technological process with a high level of precision, including preparation of concrete mixture (grinding department), casting it into molds, movement of bogies and cranes, relocation of workers and foam concrete blocks, opening and closing of autoclaves, cutting, splitting, etc. At various abstraction levels the model reflects the current level of the raw material bins, working and idle state of mills, the storage of blocks, and the status of the autoclaves. The state of equipment (see Picture 5) is represented as individual charts, which enable visual assessment of the proportion of effective work time and idle time of the equipment. 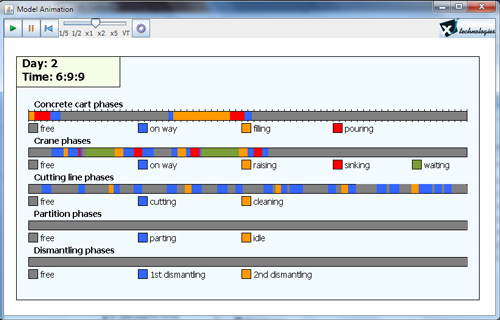 The model also displays charts for various parameters of the enterprise operations, showing the degree of resource usage (occupation of cutters and molders, splitting queue, the number of trays used). These charts allow a researcher to trace performance dynamics and degree of cast utilization. 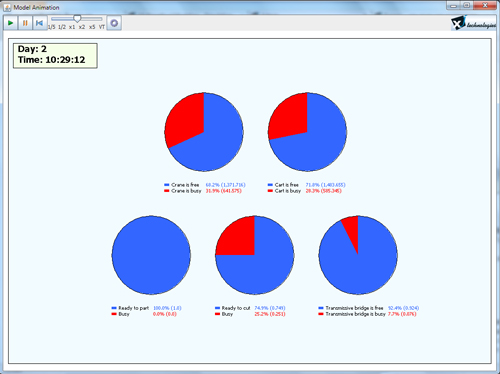 All data concerning the temporal characteristics of production processes (duration of specific operations) are stored in a database and may be changed if necessary. For example, the database stores the results of stopwatch study of production processes (the results of measuring the duration of operations in minutes). There are usually several measurement results for each operation type. The value for model calculations is determined based on normal distribution. In case there is only one temporal value stored for a certain type of operations, that value is used for calculations.

The application of modeling allowed us not only to identify the cause of the problem, but also to establish mutual understanding between the plant managers and CET Holding managers.

The above models constitute real examples of applying simulation to complex social, economic and production processes of the modern world. Animated simulations supply the manager with information that is a lot easier to perceive as compared to the traditional tables and charts – an up-to-date picture of the system operation, and an opportunity to analyze the new developments in case of various breakdowns and emergencies. Owing to its accuracy, the model may function as a prototype for company operations, providing a convenient reference point for identifying deviations and figuring out their causes.

The article has been prepared using the materials published in Rational Enterprise Management, No. 4, 2009, with the editors’ permission.