Active shooter incidents (ASI) is a common terminology that is frequently introduced to the general public since the 2000’s. Despite the first responder and civilian communities’ efforts to mitigate ASIs by developing new response tactics, neither the incident rate nor the casualty rate are seeing a decline. According to the FBI, 70% of reported ASIs between 2000 to 2016 have occurred in either areas of commerce 43.2% or educational environments 21.8%. These areas consist of large population density where over 60% of the incidents are terminated prior to the first responders’ arrival. Under these circumstances, it is vital to implement unarmed response strategies to lower civilian casualty rate.

The Run.Hide.Fight.® (RHF) unarmed response developed by the City of Houston in 2012 is implemented throughout the public and private sectors in the United States. However, there is a lack of policy and academic research data that supports the effectiveness of RHF in lowering casualties despite the nationwide implementation. Additionally, the application of RHF is limited during a large event active shooter incidents. A large event ASI such as the 2017 Las Vegas Shooting challenges civilians to Run from the shooter since the discharge rate was much faster than the previous ASI events. The Hide response of the RHF was also another challenge since the area was densely populated with lack of physical structures to seek adequate shelter. Finally, the civilians attempting to Fight the shooter may be exposed to the higher range of discharge which increases the possibility of casualty.

AnyLogic modeling software was chosen to build and emergency management simulator based on agent-based model, which would replicate the real-life ASI and would suppose to improve logistical efficiency while minimizing human error. The AnyLogic supports discrete event, agent-based, and system dynamic methods that are compatible between model methods. The flexibility of AnyLogic permits the recreation of an open area’s physical structure while implementing shooter, civilian, and police officer agents to meet the criteria of historic ASIs. The emergency management simulator consists of four manipulative parameters: evacuation delay, police response delay, tome to acquire active shooter, and active shooter agents. This case study examines the impact of the ASI casualty rates as a result of delays in event notification or police response. 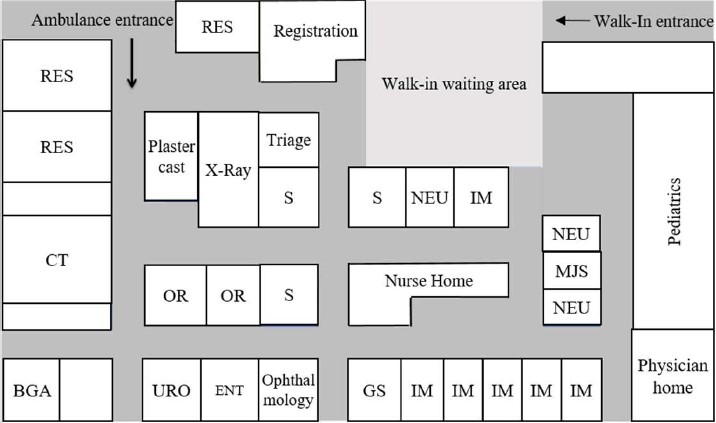