Urban Logistics (UL) is becoming increasingly important due to the global rise of e-commerce with home deliveries of small but frequent orders from consumers. Technological breakthroughs in electrical vehicles are helping to reduce energy consumption and the accumulation of pollutants in cities, but still contribute to traffic accidents and congestion, which is expected to increase by 50 % by 2050 (European Commission 2011).

The introduction of self-collection delivery systems (SCDS) is an innovation for last-mile delivery (LMD) operations in urban areas and brings new benefits.

This paper analyzes APL users in the city of Pamplona (Spain) and proposes the use of hybrid modeling for APL network design. Moreover, agent-based modeling is used to estimate future demand based on several socio-economic parameters, i.e., population, e-commerce growth rates, among others. Likewise, the APL location optimization model is dynamically executed within the simulation framework to minimize operational and service costs.

An agent-based model is designed to determine the three-year performance (divided into weeks) to estimate the future demand based on several socio-economic parameters. Then, these results are incorporated into a Facility Location Problem that provides the optimal number and location of APLs. To deal with demand uncertainty, different scenarios have been considered and solved using exact methods.

The agent-based modeling was chosen as the modeling method because the main component for using APLs is people. These people can be managed as agents who make their online purchases using an APL as a delivery scheme.

The simulation model was implemented in AnyLogic 8.7.3 using an agent-based modeling approach over city district nodes, customer nodes, and time.

The simulation framework integrates a FLP optimization model for defining the APL network, i.e., selecting the number and location of APLs over time. The presented hybrid approach has shown that simulation and optimization mutually benefit from each other. 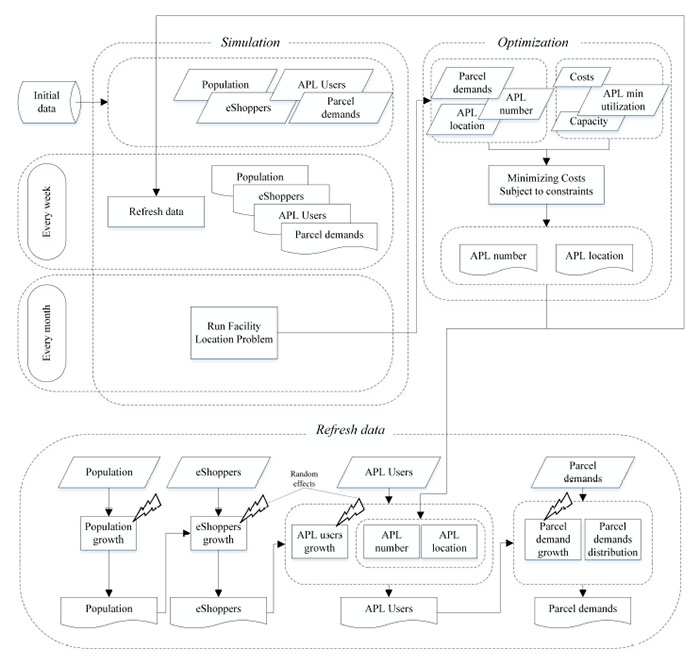 The hybrid methodology forecasts an increase of eShoppers by 10%, while the number of APLs increases up to 500% in a 3-year time horizon. In light of those results, the use of simulation and optimization tools leverages the promotion of APLs as a last-mile distribution scheme.

Planned future research will collect data about these aspects. Additionally, this approach is particularly important in the case of mobile APLs.