CSX is a railroad company that operates about 21,000 route miles (34,000 km), including one of the three Class I railroads, which serves most of the East Coast of the United States, and reaches nearly two-thirds of the country’s population.

The Network Planning division’s role is critical to the company’s success. This division identifies where to add capacity to accommodate future growth, ensures infrastructure can support and sustain a high level of service, and tries to improve the efficiency of capital spending.

Network Planning uses a multistep approach to manage the network capability. They utilize analytical tools to monitor current service levels, identify appearing problems, and determine the root cause of these disruptions (if the problem is operational or infrastructural).

In addition, they analyze what possible solutions can be applied to the problem, including investment decisions, and which of these decisions will provide the best financial return. To get the right answers, the use of traditional analytical tools is insufficient. That is why, for these purposes, CSX employs simulation modeling technologies. They use AnyLogic software for many different purposes because it allows them to create models of various systems, at the required abstraction level, with a quick turnaround time.

AnyLogic allows the railroad industry users to simulate line-of-road, terminal, and yard problems. The following three projects, completed by CSX in 2014, covered a variety of tasks that were solved using AnyLogic software.

A rail line that is jointly owned by CSX and their competitors was expected to see a large growth in demand from several coal mines. The high competition between the two companies meant that if one of them could not fulfill the demand, the other one would do so. CSX needed to identify the best operational/capital strategy to handle the increased business. They wanted to know the answers to these specific questions:

They utilized AnyLogic simulation modeling to find the answers.

The created supply-chain network model simulated the demand of empty trains from five coal mines, as well as the fulfillment of the demand, and staging of empty trains. The trains were modeled as agents moving across the network. By varying values of relevant parameters, users could infer the impacts of different factors to the train throughput (i.e. staging capacity, as well as loading speeds at the coal mines).

The model calculated the company’s achieved throughput, and the business lost by CSX, due to the lack of available trains.

The model provided a way for decision makers to gain insight into the system to help identify the maximum possible throughput. The simulation showed that the company did not have enough staging capacity to serve the increased demand, and it helped distinguish the highest priority capital investment projects to implement.

The CSX’s Nashville locomotive shop needed to be expanded in order to meet the higher level railroad network redesign. The facility included a quality maintenance shop and a roundhouse. The company’s mechanical department needed to select the best layout design from eight alternatives. The objective was to identify the layout that maximized the throughput of locomotive processing.

This project utilized the special AnyLogic Rail Library to build a model of the locomotive shop and test the different designs.

In the model, 72% of the incoming locomotives went to the roundhouse, while 22% went to the maintenance shop. The remaining 6% could go to either of them, depending on the problem they had after further inspection. Service times in both shops differed.

Locomotives moved at five miles per hour in the system. There was one common queue, with nine spots, for both shops. A locomotive was pulled into the system if there was a spot available in the roundhouse, the maintenance shop, or the common queue. The numbers of spots available in both shops and in the queue were parameters that could be varied by the user.

The model was used by the mechanical department to test their assumptions by experimenting with the system, and as a decision support tool to determine which layout configuration was best. The model helped the specialists drive the conversation among the stakeholders and base their solution on the reliable data.

The company faced greater than expected demand growth, coupled with hard winter weather and resource constraints, which led to congestion on the northern tier of the CSX network. When they analyzed this problematic situation afterwards, the Network Planning team was trying to determine what happened on the network and could avoid these issues in the future.

As the research continued, they found out that it would be easier to understand the processes if they replaced the traditional analytical methods with a visual emulator. So, they decided to reproduce, or replay, the past system behavior in AnyLogic with the use of animation on a GIS map to better understand density, flow, and congestion processes in the network and improve decision making. All of the train movement data was imported to AnyLogic from the databases, predefining the behavior of the trains in the model. The emulator included the animated train movement with statistics and indicators making the data visually understandable.

The model was presented to the C-level officers and the customers and helped drastically raise the understanding of the issue among the stakeholders.

Watch the video of Jeremiah Dirnberger from CSX presenting these case studies at the AnyLogic Conference 2014: 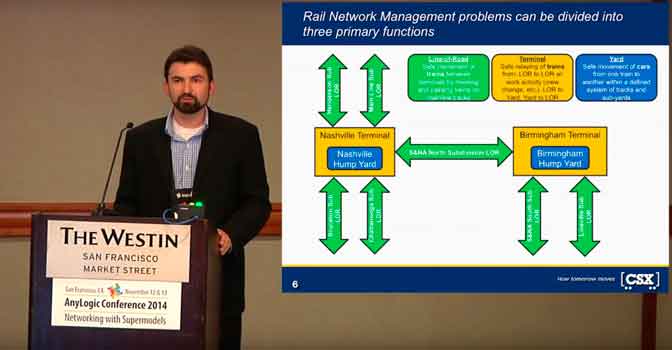