In CIS regions, passenger railway traffic is a highly specific field. Suburban railway routes are often cut due to their unprofitability. This may have a negative impact, not only on the passengers, but also on the social and economic conditions in the regions.

The Russian Central Federal District authorities faced the rail routes reduction problem. They decided to launch alternative bus routes simultaneously with the cancellation of the railway routes in order to reduce adverse impacts.

The districts authorities entrusted the planning of alternative routes topology and determining the economic effect of their launch to Focus Group company’s consultants. The consultants applied transportation simulation to test new routes and evaluate their effectiveness. The simulation would allow them to formulate and analyze various transport topology options, observe its operations in runtime, and evaluate their financial efficiency in a safe digital environment.

Thus, the consultants required a transportation optimization model that would serve as a decision support tool, instrumental in:

Having analyzed the simulation software market, the consultants opted in favor of AnyLogic transportation optimization software for building the transport and logistics model due to several reasons:

With an agent-based simulation approach, the consultants were able to prescribe the behavior of such typical model objects like localities, trains, buses, railway stations, and bus stops, and set rules of interaction between them. In addition, objects location was specified in the model with Excel sheets. This approach significantly expedited the model building. All objects were located within the region GIS map. Information on real rail and road routes loaded in the model automatically. 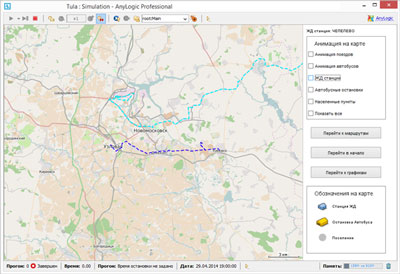 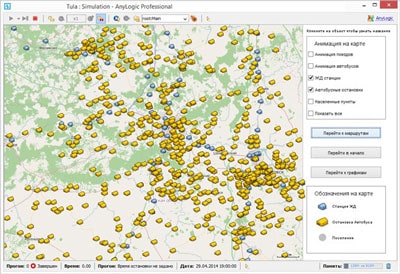 When the model was set up, the consultants tested out various transport network topology options, considering financial indicators. In that way, they managed to figure out which alternative routes would be unprofitable, and which would be cost-effective.

Six alternative bus routes were worked out as a result of the transportation optimization project. The economic analysis indicated that four of these routes would be commercially unfeasible. This information would enable the customer to make informed decisions concerning the launch of new routes.

The model was handed over to the customer as a customized standalone decision support application for transportation system analysis. The input data, such as traffic flows, can be adjusted, alternative routes can be tested out, and their effectiveness can be compared with the effectiveness of the existing ones. This application can also be reconfigured for the scheduling of transport routes in other regions.

This is a simplified version of the project's model: