Delovye Linii (DL) is one of the largest carriers in Russia. The company has 180 sites throughout the country and arranges shipments to 1,500 towns. In total, it uses approximately 540 thousand square meters of warehouse space and this figure is still rising. Clients' base widening and cargo traffic increase resulted in the need to enhance the efficiency of the company’s logistic processes. The company’s management defined two main tasks:

The warehouse space and operations optimization would initially be implemented at the company's largest distribution centers.

A large warehouse complex in St. Petersburg was the first site to be upgraded. Elevating the cargo reception process was crucial for improving the efficiency of the whole warehouse. It was assumed that the warehouse’s layout optimization would solve the problem. Simulation modeling was going to be applied in order to analyze various possible scenarios without interrupting the warehouse operations. Management realized that conducting experiments in a digital environment would be much cheaper and faster than experiments with a real warehouse.

Two models of the warehouse were designed in AnyLogic simulation software. The first model reflected the current structure. It allowed engineers to verify the accuracy of the simulation and the input data. The second model displayed potential warehouse’s layouts. The engineers altered the warehouse's topology and conducted experiments until they figured out the optimal warehouse layout option. Taking into account the experiments’ results, they put forward a proposal to move the packing area closer to the unloading gates. The warehouse layout optimization enabled DL to reduce the empty running. As a result of this the handling of goods cost was cut by 10%.

The distribution center located in Novosibirsk is another large warehouse complex of DL. It covers a total area of 20 thousand square meters. Long distances impeded the rapid dispatch from the warehouse and contributed to staff being overburdened. It was crucial to reorganize the storage of the goods in the warehouse in order to increase the dispatch speed and the warehouse operation efficiency.

The operational support services offered several appropriate configuration options. Simulation modeling was applied to test these hypotheses. Models of all warehouse’s configuration options were developed with AnyLogic simulation software. These models thoroughly reflected the warehouse operations including parameters such as empty running, staff productivity, and use of the gates.

As a result, the optimal warehouse layout was selected, and the cargo slots were redistributed as close to the overload gates as possible. With the new warehouse topology, both the technological operations speed and the goods rotation increased. It was also instrumental in optimizing the loaders work, and its productivity increased by 10%.

Simulation modeling implementation enabled DL to enhance the efficiency of its distribution centers in St. Petersburg and Novosibirsk. Having carried out several successful projects, the company began to implement AnyLogic simulation software for modeling new warehouses in addition to the existing ones. Now, in order to design a warehouse, engineers create its simulation model with several topology options and specified technological processes. The model allows them to consider all operational aspects of the planned warehouse, including processing of goods and loading of the areas, cells, and resources. Then they calculate indicators for each option, compare them to select the optimal warehouse layout and improve the technological processes coordination scheme. 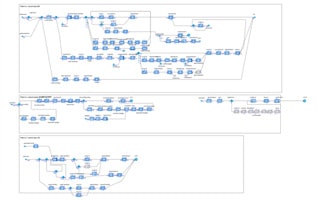 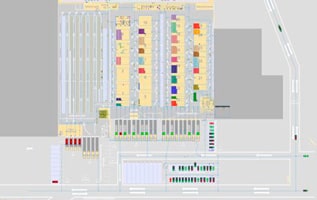 Warehouse logistics is not the only branch where DL intends to use AnyLogic simulation software. The company is determined to use simulation modeling for financial planning and business process management.