When planning for complex underground works, whether it is in construction or mining, specialists have to consider many factors and their impact on the whole project. Such works are characterized by limited operating resources and space, as well as close interconnections between processes. As a result, specialists inevitably face difficulties when developing schedules.

To solve this scheduling problem, IBCON engineers had to change the approach to scheduling. Usually, underground construction projects are managed via Gantt charts, which schedule events that are known in advance. However, every project is subject to uncertainties. For example, managers may know about potential problems but be unaware of the time and probability of their occurrence. To understand when such events would happen and their impact on the work schedule, the IBCON engineering team opted to use simulation modeling software. 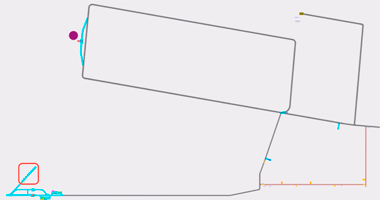 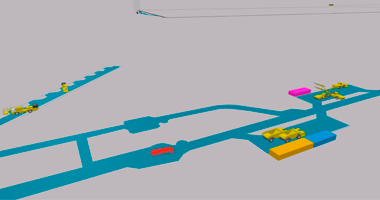 First of all, using the input data and AnyLogic’s capabilities, the team developed and visualized a simplistic ore mine simulation model. The developers used the elements of the Fluid Library and the Process Modeling Library to describe the rock volume, the mining process, and the process of rock transportation to the surface. With the agent-based modeling capabilities, the team set the operation logic for each element of the underground mining system, including:

Moreover, in the ore mine model, the IBCON team considered the amount of rock that was mined, workers and equipment availability, car speed, conditions for aligning work in several stopes, transportation machinery loading factors, time between equipment maintenance, winding intervals, etc. Together, modeling these considerations made the model highly accurate.

Experiments with the underground mine model

After developing, running, and debugging the model, the developers performed the parameter variation experiment to see how the project completion time would change.

In the first experiment, the IBCON team wanted to determine if the general project implementation schedule would work with the initial parameters of machinery, equipment, stopes, and other elements of the underground mining system. As a result, the team found out that the project’s turnaround time could be reduced by three months. However, certain types of work would need to be carried out for longer than initially scheduled.

The goal of the second experiment was to minimize the project’s project turnaround time. The developers wanted parameters that could speed up work as much as possible without compromising its production and safety. As a result, they were able to reduce the turnaround time by seven months.

In the third experiment, the IBCON team considered a case where some initial parameters had been wrong, drilling rigs and LHD’s failed regularly, and the rock from one of the stopes had to be moved to a more distant dry backfilling area. The result of the experiment showed that the work completion time took one and a half months longer than scheduled. Following this, the IBCON team conducted a factor analysis based on the experiment results and determined the most subversive factor so that its influence can be minimized in the future.

As a result of experimenting with the model, the developers produced a log with the timings for events. Using this data, they drew up a cyclogram, a monthly schedule by day, and a Gantt chart, which had different levels of detail for work planning.

Engineers could update the model data to keep it up to date as events unfolded. They could then run the model again and use the results to adjust the work schedule. They could repeat the process as many times as needed until the underground mining project was completed.

While developing this solution for underground works scheduling, the IBCON team built a simulation model for broken rock extraction and transportation at an ore mine. Based on the modeling results, the engineers made:

At the same time, they used the AnyLogic model to analyze how various factors affected turnaround time compared to the initial project schedule. This took into account uncertainties and helped in choosing the most appropriate strategies for the underground mining project.

The technology developed by IBCON is applicable in every industry dealing with tunneling work. Simulation modeling is a flexible solution that enables the calculation of the dynamic pace of stope construction, the creation of utilization schedules for each piece of machinery, the optimization of workloads, testing of “what-if” scenarios with varying parameters, and more. The ability to understand and forecast activities is a powerful support tool that helps inform management decisions.