One of the largest oil and gas pipeline operators in North America was delivering oil to a client that was not always able to accept the incoming batches. The operator was challenged to quantify the system impacts of deferred downstream deliveries. They also needed to determine whether the existing tankage at upstream oil terminals would be adequate to store the deferred batches. To better understand the system behavior and impacts of the existing problems in the pipeline network design, the company authorized the development of a network simulation model. The project was carried out by the AnyLogic Company and Stream Systems Ltd.

The business objectives of the project were:

The consultants’ task was to create a model that would be flexible enough for the oil and gas pipeline operator to reframe the problem and experiment with the model to solve other challenges.

The simulation model included terminals, tanks, pipelines, and oil batches. Each batch was designated a route that included the start and end terminals. The route could go along different pipeline segments and terminals, and a batch could be temporarily stored in a transit terminal when going through a route.

Oil type compatibility rules were taken into account when there were different types of products in the same pipeline or terminal.

The model also included animation of the pipeline network on a map that visually highlighted the location of each batch and each pipeline’s segment status (normal/congested).

The key performance metrics that were taken into account during model result analysis were: throughput and infrastructure capacity. The company was able to:

The analysis of the experiment results led to an organizational policy change that allowed them to achieve $50-$80M in capital savings, and created additional network throughput of $2M monthly revenue from that point forward. These results were achieved with approximately a $3M investment, which was a phenomenal outcome.

First, the operators’ specialists suggested creating a simulation model at a low level of abstraction. They were familiar with simulating oil movement in pipelines at a molecular level. These models were useful for leak detection, fluid dynamics, and hydraulic problems, but were far too complex to simulate pipeline network behavior.

To do this quickly and easily, and at a desired accuracy and reliability level, they needed to look at the system at a higher level (for example, simulate oil batches, not molecules). Stream Systems’ consultants convinced the oil and gas pipeline operator to use AnyLogic to complement this task. Its multimethod modeling features allowed the users to choose the desired abstraction level to solve the challenges of the business.

The created model utilized AnyLogic’s multimethod capabilities to the full extent. The model was a combination of all three simulation paradigms: agent-based, system dynamics, and discrete event methods. This allowed the users to save time and effort reproducing the pipeline network design in the model. 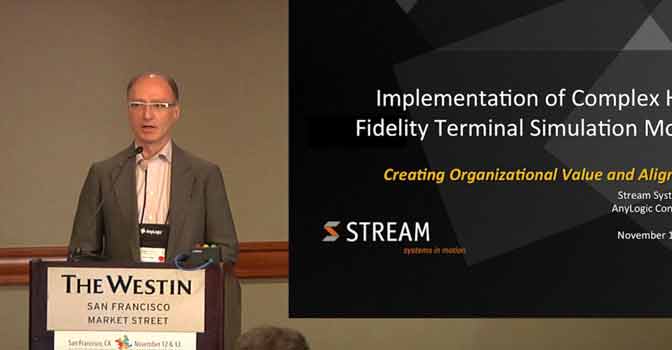