Canada has the world’s third largest oil reserves. However, most of the oil is in oil sand — a mixture of sand, oil and water — which has to be heated up with steam to retrieve the oil. Though operational costs for extraction are high, capital investments in this sphere reached $26 billion in 2014, indicating a promising future.

To extract oil from sand, a complex system of oil wells, pipes, steam generators, and other equipment is needed. It is costly to maintain such a distribution system, and outages may lead to disruptions in steam injection and oil production. For oil well optimization, cutting expenditures and capturing production lags, Stream Systems used AnyLogic simulation modeling. Using spreadsheets, engineers could model the working process of 10-20 oil wells. Adopting a simulation approach allowed them to model production for hundreds of oil wells.

The simulation model consisted of smaller models of the system’s elements. This modular approach allowed engineers to see how the work of a particular operation might affect other elements.

Because of the model’s complexity, the AnyLogic multimethod approach (a mix of agent-based, system dynamic, and discrete event modeling) was applied. The system acted as a liquid carrier, and the lag in one component might lead to lags in other ones. The AnyLogic fluid library was used to capture these lags, including for emergency situations.

AnyLogic was seamlessly integrated with external data sources, allowing modelers to use any type of files to input the data into the model. To manage additional calculations, and make the model more realistic, external Java libraries were incorporated. The model’s input data included:

The model consisted of oil wells that acted as individual agents. Each well had a particular behavior and was connected with pipes and other flowchart components. It was easy to add and adjust components in the model if needed.

Apart from looking at specific parts of the model, it was also possible to observe the production process, at a high level, to make operational and strategic plans. At both levels, it was possible to set parameters and run various experiments to perform optimization. Dashboards showed statistical data to visualize changes in the system.

AnyLogic simulation modeling helped connect parts of the system, located above and below ground. With the multimethod simulation modeling approach, it became possible to run multiple scenarios, including Monte Carlo and what-if experiments, and analyze variabilities in terms of scheduling and maintenance, providing the system’s optimization.

The Fluid Library helped represent each part of the oil well optimization model with high granularity and display the ripple effect and breakages in the system. Moreover, it helped consider dynamic changes and their impact on the system. With this approach, it became possible to make real time decisions and capture the quality of the oil.


The model also contributed to decision making on future capital investments as well as their reduction: establishing when to replace or provide maintenance.

AnyLogic software has also been successfully incorporated in the company’s other projects. 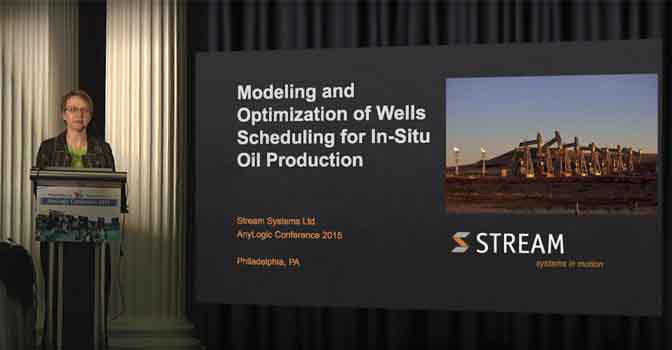