Fruit of the Loom (FOTL) is one of the largest US apparel manufacturers and marketers. The company was expanding, and the executives wanted to know if it would be beneficial, in terms of shipping costs, to add a new distribution center (DC) in the US, or to redistribute products to a pre-existing DC. The contractors decided to simulate the whole supply chain in order to visualize DC locations on a GIS map, and the supply networks between them. Focusing on wholesalers, the company considered distributors as customers. No small packages or end-users were involved in this case.

AnyLogic simulation software was chosen due to its agent-based modeling capability. The team put the description of the supply chain into the model, and defined the following as interacting agents with their own goals and rules, individual behavior, and interaction policies:

With AnyLogic, it was easy to test multiple scenarios and their variations. The input data (number of DC, suppliers, etc.) was different for each variation.

The team found advantages of applying simulation at different stages. It enabled abstraction, simplifying a complex system by focusing on relevant details and estimating them.

When building the model, the team first looked at shipment data, focusing on the locations of high demand customers, as they made up 85% of all the company’s shipments. These distributors used truckloads and rails. The team also considered shipments the customer received per year and the demand per shipment in units per customer. Last year demand indicators were used as model input.

To estimate and visualize the existing transportation routes, the team used AnyLogic GIS capabilities, which linked the agents of the model to their locations. The company’s head DC was located in the south-east US. From there, the cargo was distributed to wholesalers directly or via transit DCs. This could be a reason for additional transportation costs, which is why the team estimated an optimal location for new DC regarding the wholesalers' disposition. For this purpose, the developers conducted supply chain Greenfield analysis. This experiment is available at anyLogistix, the multimethod software for supply network optimization, design, and analysis.

Scenario #1 included the original DC and outlier customers, and did not show shipping cost reductions regarding products distributed from the DC.

In Scenario #2, the original DC was used, rerouting the shipment to other existing DCs, located on the east and west coasts of the US. The scenario resulted in a 42% cost reduction. 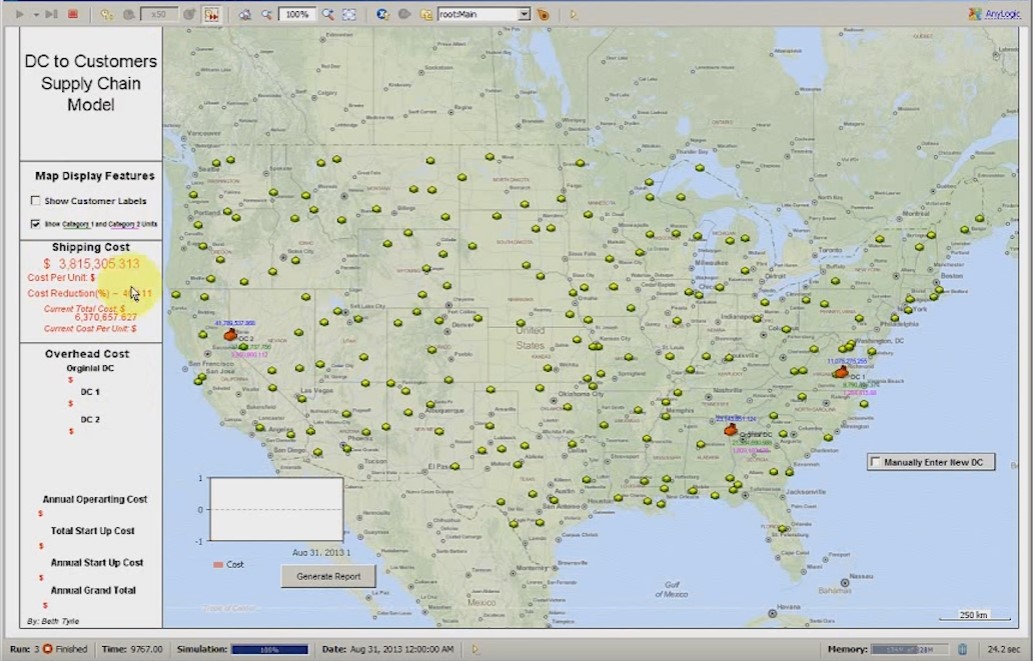 In Scenario #3, the network with the original DC was incremented with a new DC in optimal GIS-location. Cost reduction appeared as 32%.

Scenario #4 included the original DC, rerouting products through another already existing DC on the west coast and a new DC in an optimal GIS-location. The scenario's results showed about a 45% cost reduction in the supply chain.

The reports on the model runs for each DC could be exported as an Excel file.

After the experiments, the model was extended with the following agents to adjust for an international supply chain:

Then the team could design the whole international supply chain and determine the optimal location of the DC, taking all agents into account.

While decisions made on people’s expertise, without examining the data, may be considered biased, data-driven insights from GIS and AnyLogic, paired with business knowledge, helped develop supply chain recommendations.

For this case, simulation modeling was used as an exploratory research tool to assess the suggestions on placing DCs throughout the country and to prove their economical effectiveness in terms of manufacturing and customer’s supply chains.

The developers highly rated AnyLogic user-friendliness, which allowed them to drag and drop the elements and customize, or expand, the model to any conditions, which would benefit Fruit of the Loom’s international business.