Decisions made by health care professionals require tools for planning, testing and assessment of new technologies or interventions. The complex structures, interactions and processes involved in health care, make change and innovation an ongoing challenge. Patrick Einzinger and Christoph Urach from DWH Simulation Services and Vienna University of Technology in partnership with the Austrian Association of Social Insurances (AASI) were given an opportunity to analyze public data for the purpose of critical future decision making.

The AASI assembled routine care data upon reimbursement of heath care providers, which includes drugs prescribed, services rendered and diagnosis. Typical statistics and mathematical modeling were considered as a tool to analyze the data, but simulation was chosen to ensure the mass amount of data could be fully utilized, thus increasing the accuracy of the analysis and results. Furthermore, AnyLogic Simulation and Modeling software was employed for its multimethod capabilities. The models built include an agent based simulation of multiple reimbursement schemes in the extramural healthcare, a system dynamics model of the consequences of group practices, and a microsimulation model for health technology assessment of screening for Abdominal Aortic Aneurysms (AAA).

The consultants built a model that includes data imports of patients, medical problems, medical providers, medical services and reimbursement types using AnyLogic Simulation and Modeling software. AnyLogic was chosen for its agent based capabilities which allow the incorporation of different parameters for a high number of subgroups, unlike a top-down approach where it would be necessary to split the patient population into subgroups. In AnyLogic, agents simply have attributes that determine the subgroup and therefore the parameter. Then, as multiple simulations are run, the consequences of each reimbursement system can be realized.

Due to the number of diseases to consider, it is not possible to complete extensive literature searches and gathering of expert opinions on each disease. The approach used shows how analysis of routine health care data can serve as input for a complex and comprehensive model structure as the data provides accurate prevalence and incidence rates for the diseases. Even though assumptions are necessary for certain portions of the research (i.e. treatment pathways) the optimal selection of providers to their service portfolio leads to plausible and reasonable results.

The model is not only useful for the comparison of reimbursement systems but also for testing assumptions and will assist with formulations of new reimbursement systems, due to effects that are logically inherent and show quickly in simulations, but are not typically straightforward or immediately obvious.

To provide insight for AASI, the consultants developed a system dynamics model using AnyLogic simulation and modeling software, where nearly every variable is an Array Variable due to the 4 groups of physicians (single practice pulmonologists, single practice internists, group practice pulmonologists and group practice internists). The model’s input values include fixed parameters, (data analysis, OOEGKK, and internist/pulmonologists) strategic assumptions and assume the number of referrals and new cases would increase.

The parameters of the model were given to the AASI for simulation, but DWH were unable to view the results due to privacy policies. The output of the simulations included total fees that were paid, number of cases, number of consultations, number of special services, number of double services and the value of each case. The model also allows the AASI to change input variables and run multiple scenarios.

Abdominal Aortic Aneurysms (AAA) are prominent in the male population of Austrian men over 65 years of age. If detected at an early stage, the occurrence and risk of rupture decreases significantly versus detection at a later stage where expensive and dangerous surgery is the most probable outcome. Ultrasonography is used for early detection of AAA, which is noninvasive and a moderate expense.

The AASI employed DWH to find out the following:

The consultants utilize agent based modeling in AnyLogic software, giving every person an aorta whose diameter growth depends on age, sex, smoking habits, history, and other diseases. Furthermore, they run simulations of multiple screening strategies to find the optimal solution.

If regular screenings over age 65 years is introduced for about 40% of the population, the death rate will decrease by about one third. Taking other measures to prevent AAA was also considered. For instance, decreasing the amount of smokers in the Austrian population from 38% to 20% decreases the amount of AAA similar to the decrease seen in implementing a regular screening process.

Its modular design allows integration of additional knowledge on AAA for further analysis and evaluation of screening strategies or other interventions within a short time-frame and the disease progression module can be adapted without changing the whole model structure.

A study of this magnitude on patients is often impossible due to temporal, logistic, ethical or other reasons. Utilizing simulation modeling gives insight on possible consequences of interventions, which results serve as decision aid for health care decision makers, plus the design can be adapted to evaluate other diseases with similar progression.

To learn more about Einbzinger and Urahc’s work in AnyLogic software, view the AnyLogic Conference 2013 presentation: 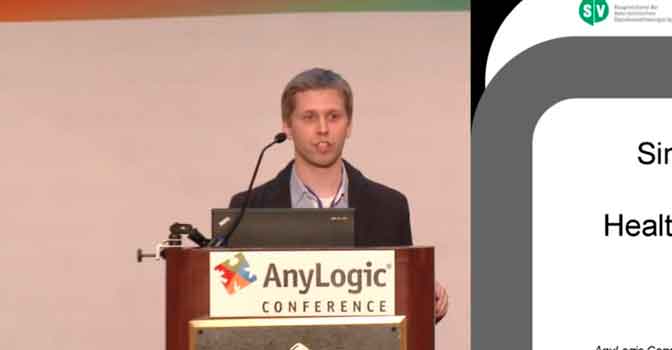