An initiative by the Department of Mechanical and Industrial Engineering at the University of Toronto, the Centre for Research in Healthcare Engineering (CRHE), was in response to the immediate and compelling desire for efficiency and quality improvements in the Canadian healthcare system.

Policy makers were motivated by the overall ranking of healthcare in Canada. A study from 2010 showed low rankings in quality of care, effective care, coordinated care, patient centered care, timeliness of care, efficiency, and equity, in comparison to Australia, Germany, the Netherlands, New Zealand, and the United Kingdom.

In order to test and visualize policy changes and other possible solutions, the CRHE planned to build a decision support tool to observe behavior and select appropriate policy changes that could ultimately increase life expectancy by increasing access to healthcare, increasing patient satisfaction, and changing the perception of healthiness.

The model included descriptive data from the Irish healthcare system codified through content analysis, and quantitative data from the Central Statistics office of Ireland, OECD health statistics, and Eurostat health databases, which were codified through statistical analysis. Data from Ireland was used because the country experienced substantial strategic shifts, external economic shock, and could provide extensive, transparent documentation.

The documentation from the healthcare systems was compiled, run through a content analysis process, moved through a UML for structure, and plugged into AnyLogic as a platform to build the model and run scenarios.

The model structure of the healthcare system included elements, goals, and strategies. Elements included patients, physicians, other clinicians, hospitals, clinics, and corporations, including insurers and regulators. Goals were outcomes such as life expectancy and mortality, access to healthcare, and other determinants of health, as well as subjective outcomes such as satisfaction and perception.

Strategies and policies that were considered included:

The ability to visualize the large amount of data and derive patterns was the greatest benefit achieved from this project. Variables such as life expectancy, expenditures, consumption, etc., could be plotted and observations could be made dependent upon country. In future research, the CRHE will test policy change scenarios and work to improve the healthcare system of Canada and other low ranking countries.

Watch the presentation of the project by Neil McEvoy from CRHE: 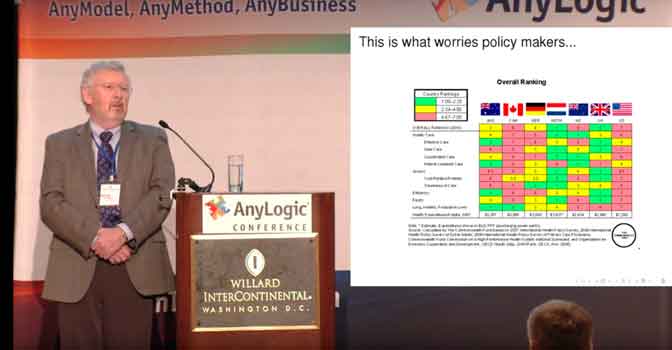