RUSCON is one of the major container shipping companies in the CIS region. The company needed a container yard planning solution to modernize one of the rail container terminals and determine maximum capacity of the whole facility and its components. It sought the expertise of container yard simulation specialists from Dilibrium Consulting Company to model terminal components including the container yard, transshipment equipment, and rail infrastructure.

The consultants decided to simulate several different scenarios of terminal development to find the best alternative.

It was decided to build a digital twin of the terminal in the AnyLogic container yard planning environment. This dynamic simulation model, unlike traditional analytical ones, would reflect the facility with high accuracy – the variance between real data and virtual operations results was estimated to be within 5%. Digital twin technology provides detailed modeling and allows for considering various parameters, as well as non-linear, nontrivial, and unknown dependencies and cause-effect relationships.

The starting point of the container yard simulation is the arrival of trains with loaded containers to the railway sorting yard. Then, the rail cars are switched to consumers’ railway tracks following the train schedule. The moment when trains with empty containers leave the terminal is the endpoint of the simulation.

Within the framework of the project all major terminal operations were modeled including: 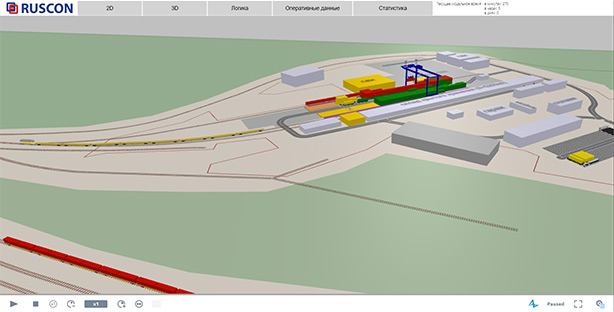 
The capabilities of the AnyLogic container terminal simulation environment enabled engineers to create 2D and 3D model animation. The animation allowed zooming in on certain model areas and watching the operation of its components. This approach helped visually control processes in each facility area.

3D animation of the container terminal simulation was useful for visual control over processes. For containers, color assignation was implemented to show their current state and changed dynamically:

The engineers introduced in the container yard planning model “virtual sensors” which were gathering information from the digital twin and transferring operational data while the model was running. This facilitated tracking simulated facility performance and model calibration. Such a thorough approach in data gathering allowed for close matching of the digital twin with the operations of the real-life container yard. 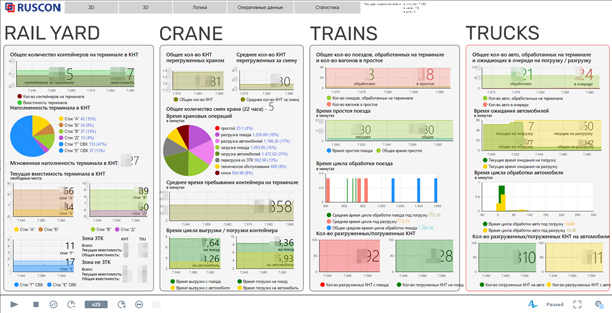 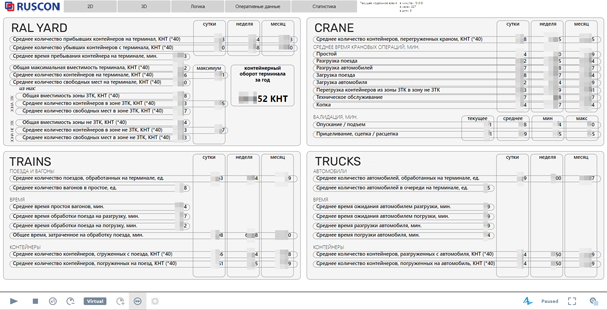 The model also facilitated in testing the operations of the frame crane, the terminal’s loading machine, in a virtual risk-free environment. The model reflected three-axis movements of the crane’s trolley and spreader. Moreover, the different time duration of each crane operation was considered. As a result, crane operation bottlenecks were detected, and optimization measures were suggested and supported by experimental data.

In AnyLogic, industry-specific Material Handling Library simplifies the simulation of complex material handling operations at terminals. It can be used to design detailed models of storage facilities, including operations with conveyors, AGVs and cranes, and manage material workflows inside four walls.

The model developers also analyzed how internal logistics operations influence the general performance of the container terminal simulation. They set up the experiments and looked at how KPIs were changing. This work resulted in simulation-based recommendations on how to upgrade infrastructure and reorganize terminal business processes.

After the experiments were held and the output data was obtained, the engineers were able to define facility bottlenecks and possible optimization scenarios. They discovered that further optimization measures could enhance terminal capacity by 57%.