Over the last 40 years, the United States rate of cesarean delivery has increased dramatically, from 4.5% in 1965 to 32.8% in 2012. Many of these cesarean deliveries, some researchers say 50 percent of them, are unnecessary. In 2009, childbirth related hospitalizations accounted for 7.6 percent of all inpatient costs, totaling $27.6 billion.

The challenge of reducing the cesarean delivery rate has been recognized by numerous researchers for years. For the first time, in research conducted for the Washington State, Alan Mills, FSA MAAA ND, a research actuary, and his colleagues reproduced this part of the United States healthcare system in a simulation model to allow the stakeholders, including health agencies, insurers, clinicians, and legislators, to test their assumptions on the model to find the right solutions.

The researchers approached the problem on an individual state level as states differ in terms of birthing environment, including healthcare infrastructure and Medicaid conditions. At this stage of the project, they looked at four states: Washington State, Illinois, New York, and West Virginia, because they wanted a broad range of cesarean delivery rates.

They decided to choose the agent-based modeling method because it allowed the modelers to reflect the behavior of many heterogeneous agents acting independently. Moreover, agent-based modeling allowed them to reflect the network effects and feedback, when women and obstetricians make their decisions based on what their friends and colleagues do and previous experiences.

The model included the following types of agents:

The researchers parametrized the agents with real world data imported from Excel. For the private information, they generated synthetic data based on the real data.

It was important to simulate the key behaviors of the agents correctly to reflect the real decision making process. The simulated behaviors included women choosing birth attendants (obstetricians, CNMs, or LMs), birth attendants choosing hospitals of association, delivery attendance (vaginal or cesarean), the process of submitting a claim to insurers/Medicaid, and payment.

All of the behaviors were based on the same template that had ten main components (see picture). For instance, women chose their birth attendants based on their childbirth month (input data), motivation (desired birth attendant type), and attributes (geographical location).

The model had an interactive interface so that the users could play with parameters (motivations, geographical distributions, etc.), run experiments, and see how different policies would affect system behavior. The results window included financial and population outcomes so the users could easily see and compare the effectiveness of various strategies. The model also included visualization on the map, where all of the agents were animated, and the problem was given a geographical perspective.

With AnyLogic, the researchers created a game oriented, simulation based, learning environment for the stakeholders to better investigate the problem and test possible strategies. The training sessions that used the simulation model significantly increased the stakeholders’ understanding of the problem and could lead to the development of better policies to decrease the unnecessary cesarean delivery rate.

The primary results of the experiments showed that the previously suggested healthcare provider payment reform would not work alone, and the stakeholders would need a multifaceted strategy. Also, if retooling the workforce was chosen as part of the strategy, it would take a lot of time.

This was the first simulation model in the world addressing the high cesarean delivery rate issue on a regional level. 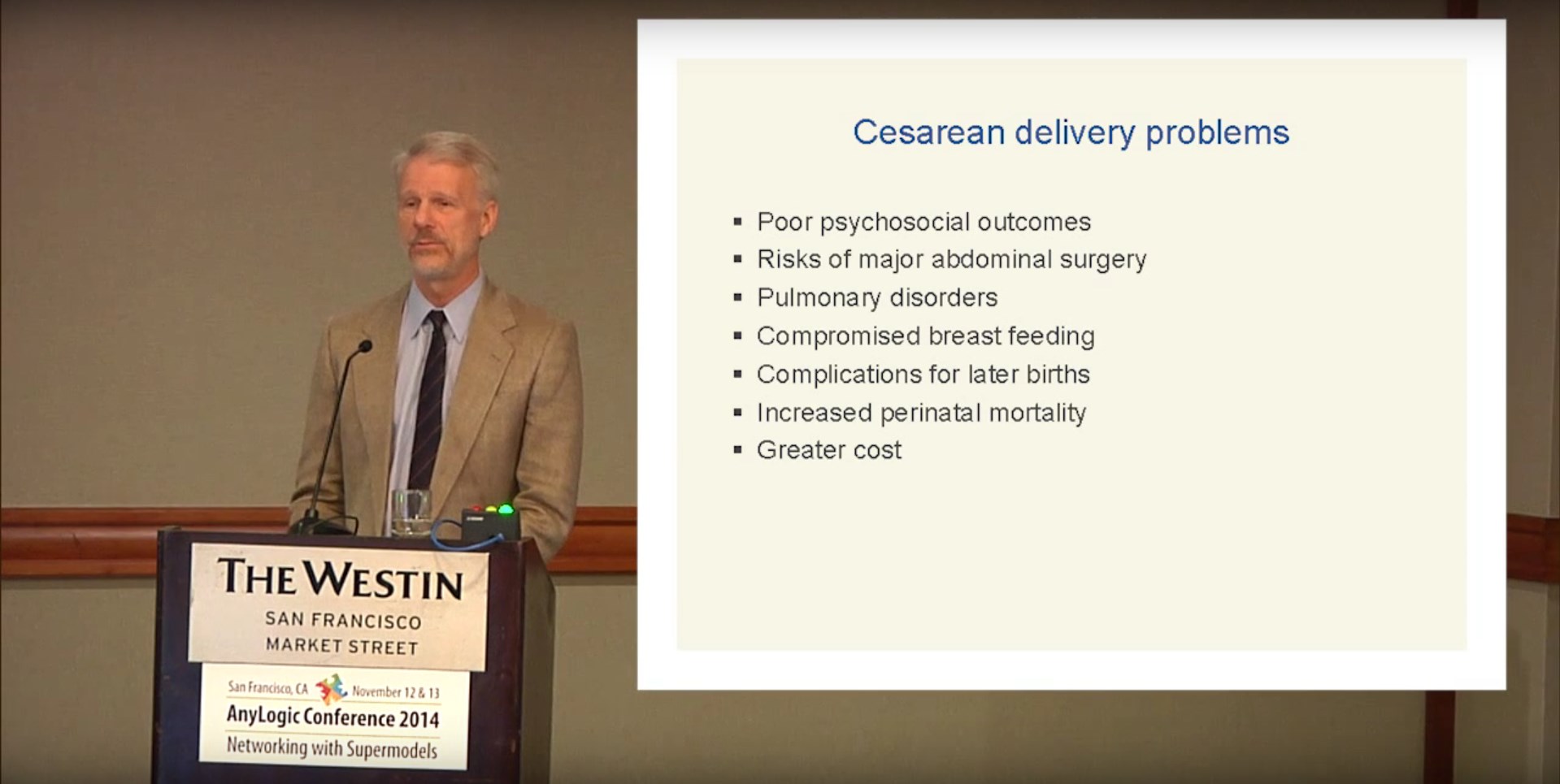